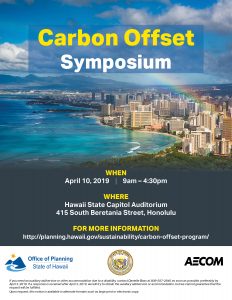 On June 4, 2018, Governor David Ige signed into law Act 16, SLH 2018 which requires the Office of Planning in partnership with the Greenhouse Gas Sequestration Task Force to investigate and establish a framework  for a carbon offset program, through which revenues realized from the sale of carbon credits may be invested into projects to generate further carbon offset credits or enhance the State’s mitigation and adaptation to climate change.

Input gathered from the Carbon Offset Symposium will be included in a future report investigating the “Feasibility and Implications of Establishing a Carbon Offset Program for the State of Hawaii,” to the Hawaii State Legislature and the Hawaii Climate Mitigation and Adaptation Commission 20 days prior to the convening of the Regular Legislative Session of 2020.