In partnership with NOAA, the Heeia NERR will be managed by a lead state agency, the University of Hawaii, Hawaii Institute of Marine Biology (UH-HIMB). The Reserve Advisory Board (RAB), which includes the land managers and partnering organizations, will advise UH-HIMB. Additional information can be found on UH-HIMB’s website.

The Office of Planning coordinated the selection and nomination of a site to become a National Estuarine Research Reserve (NERR) in Hawaii. On January 19, 2017, Heeia was designated the 29th research reserve in the NERR System (NERRS). Information on the national system can be found here. 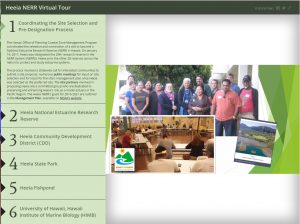 The site selection process began in 2013, and more information on this process can be found here.  After receiving applications submitted by interested communities and the University of Hawaii, Heeia was identified as the preferred site.  In May 2014 former Governor Neil Abercrombie submitted a site nomination request to the National Oceanic and Atmospheric Administration (NOAA). This nomination was approved by NOAA on October 27, 2014. 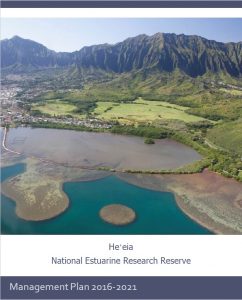 The third phase of the process involved the drafting of a NEPA environmental impact statement (EIS) and the development of a Management Plan for the site. This Management Plan (MP) is a guidance document, which was developed with input from the public through comments and in-depth discussions in focus groups in 2015. The draft MP and draft EIS were published and comments were collected according to NOAA’s public comment process in October 2016.