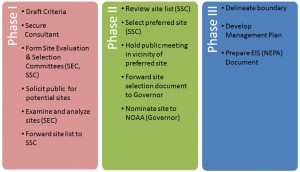 To solicit proposals, The Office of Planning’s Coastal Zone Management Program (CZM) issued a public request for proposed NERR sites in Hawaii. During the initial solicitation period between April 17 and May 15, CZM received inquiries from all four counties, and one site proposal – Heeia Estuary on Oahu. After an extension of  the call for proposals to June 13, one additional proposal was submitted, from Hilo Bay on the Big Island of Hawaii. During the extended period, the Heeia proponents were permitted to supplement their original proposal. From the two proposed sites, the Site Evaluation Committee determined that both Heeia Estuary and Hilo Bay should be on a “short list” for the Site Selection Committee to consider.

In Phase II, the Site Selection Committee (SSC) reviewed both site proposals and were given all available information to consider. The committee selected Heeia as the preferred site. The site selection document  was drafted and public meetings took place in order to collect comments on the proposed site. These comments were considered in the development of the site selection document, which was forwarded to the Governor in the first quarter of 2014. The Governor nominated the site to NOAA in May 2014. NOAA approved the nomination in October 2014.

Phase III  involved delineating the boundary of the  site, working with partners to develop a management plan, and assisting NOAA as they developed a NEPA Environmental Impact Statement (EIS).

What criteria were considered in reviewing sites to become a NERR in Hawaii?